In recent years, ice cover has been decreasing, especially in the Arctic. There was a clear tendency to discern that in September - the time of the ice minimum in the northern hemisphere - there was less and less ice in the Arctic Ocean. By contrast, there are no signs of a new minimum ice cover in the summer of 2021.

When looking at the course of sea ice decrease in the Arctic, the year 2021 is currently fifth from last. This is still well below average compared to the last few decades, but at the moment there are no signs of a new record low, like the graph from meereisportal.de shows. 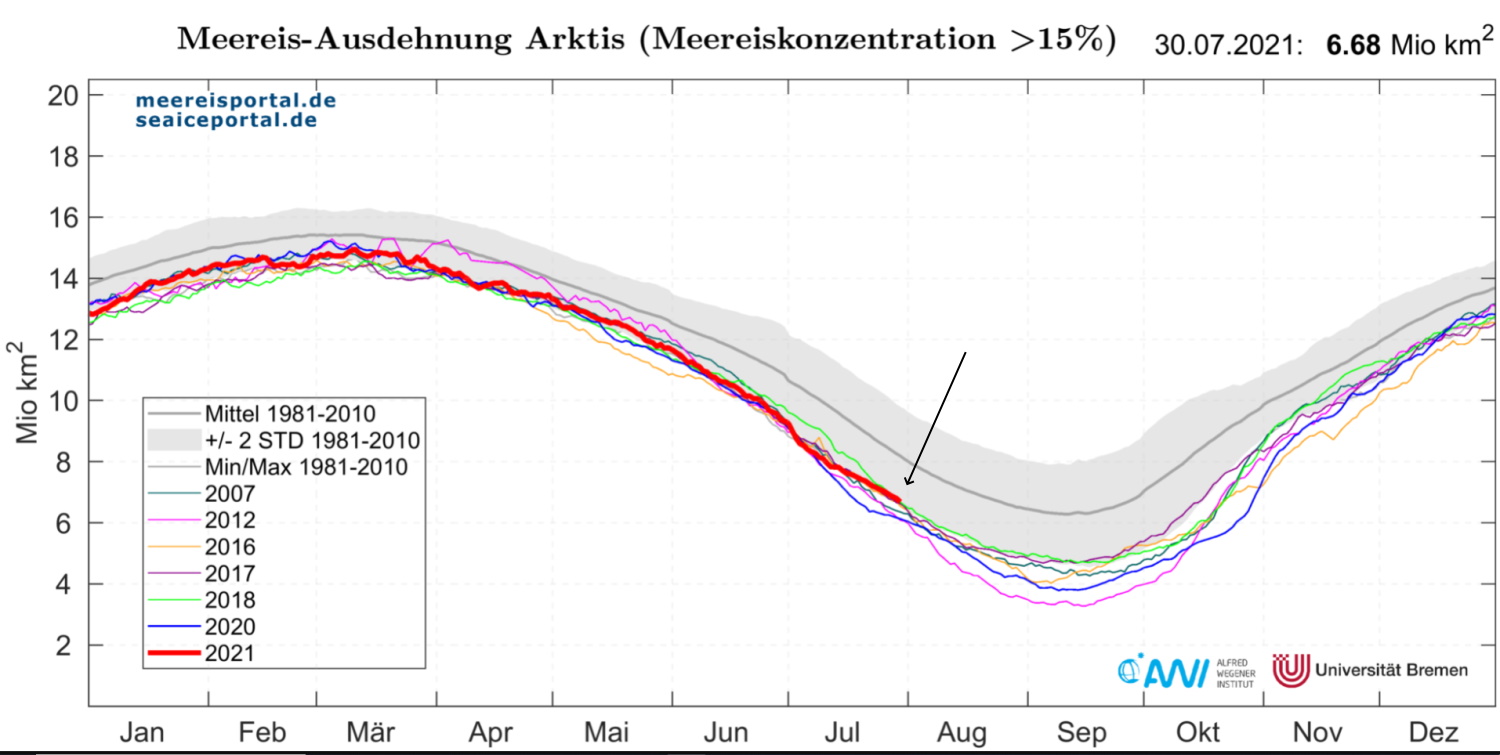 Of course, there are still six to seven weeks of ice melting left. Only around August 20, the temperature in the inner Arctic begins to drop below freezing point due to the rapidly decreasing solar radiation. There, the remains of ice and slush begin to freeze together again, while it continues to thaw on the edges of the pack ice until mid-September.

The picture in Antarctica is completely different. Here, the usual seasonal ice increase is still taking place and the ice expansion in 2021 is in the range of a record maximum of the last decades.

The past year 2020 was also an above-average ice year in the Antarctic regions of the southern hemisphere.

The concrete ice concentrations and distribution of the pack ice are updated daily, e.g. on the website Meereisportal.de view.

In line with the designs shown here, the daily temperature anomalies are on the page Climate Reanalizer shown. On July 31.07.2021, 1, the entire Arctic region was specified as 2,5 degree too warm compared to the long-term average, while it was XNUMX degrees too cold in Antarctica.

After a mild beginning of winter 2020/2021 with little snow, cold air advances in Central Europe followed until late spring. On May 07th, even in Berlin in the late morning, there was about 1,5 hours of heavy snowfall, which for the first decade of May has not occurred for at least many decades. May 01st, 1970 was one of the latest dates for snowfall in Berlin.

In the low mountain ranges such as the Ore Mountains, the Bavarian Bohemian Forest and the Giant Mountains, the winter snow remained for a very long time compared to the last few years. So it looked anything but spring on May 05th, 2021 on the Krkonoše ridge with a view of the Schneekoppe.

Despite the often still existing minus temperatures, the snow slowly disappeared at the end of May. Because the power of the high sun alone ensures melting and auc even in frosty weatherh drying processes. The Sniezka weather station reported snow remnants up to and including June 11.06.2021th, 20, but webcam images showed that the remains of snow in the area around Schneekoppe and Brunnenberg had persisted at least until the first major heat wave around June 2021th, XNUMX.

Basically, from earlier decades, the persistence of snow remnants in parts of the Giant Mountains in summer is not unknown. In the past, when the summer was not so hot, remnants of winter snow could settle in the large and small areas Snow pit bis hold for autumn. On steep north-facing slopes, the snow often blew several meters high into the snow pits in winter and the sun only came briefly to these places even in summer. I do not know how long remains of winter snow were left in the snow pits in this year 2021. But I wouldn't be surprised if this was the case until July 2021.

Here is a detailed overview of that The Schneekoppe climate and the altitude of the Giant Mountains.